AS DARWIN’S COMPELLING DISCOURSE on evolution and natural selection gained a firm ground in the scientific imagination, researchers felt they were ready to address the next grand challenge: the origin of life on earth. Yet, I will argue, they plunged into the problem haphazardly and prematurely. Not surprisingly, their efforts were misguided by the lack of a proper intellectual apparatus and marred because of dogmatic thinking about the workings of Nature. 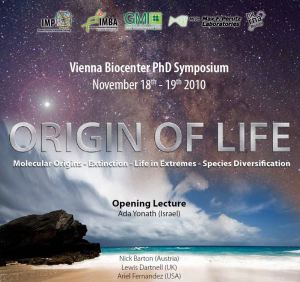 Lacking the power to predict evolutionary fate, Darwin’s theory, as it is often called, is actually not a theory but a discourse, and a powerful one. Darwin’s opus does not contain a theory of evolution in so far as it does not enable us to make verifiable predictions, the hallmark of validation for a scientific theory. Many a-priori evolutionary outcomes could in principle result from within a scenario where selection pressure becomes operative. Darwin only explains the outcome ex-post-facto. If the giraffe’s neck can be explained and justified, it is primarily because we already know what a giraffe looks like. And, by the way, the long neck is as much the outcome of adaptation as it is of the dwindling giraffe population in the ecological niche where high-hanging fruits were to be found…

Just like Freud with the mysteries of the psyche, Darwin did not created a theory but rather a discourse. We have not managed to escape this discourse, just like we have not managed to elude Freud’s spell when it comes to explaining the psyche. Darwin bequest for us is a discourse that truly helps us come to grips with evolution. This is surely an enabling legacy and a most commendable one, but not a theory of evolution.

Like Freud’s, Darwin’s discourse has been grossly abused and misused. Perhaps the most common mistake by those who misread Darwin is the idea that evolution equates natural selection and that only adaptive forces are at work in promoting biological complexity.

Against this background, many scenarios were advanced to “evolve” the primeval chemistry of robust fast reactions in an environmentally hostile world into the more subtle chemistry needed to enable the generation and replication of information-coding molecules, the hallmark of a biological entity. Over and over again, the thinking was cast in the language of evolution. The chemistry must become evolvable in a benign niche where it will get a chance to polymerize molecules into material capable of performing enzymatic activity while serving as information carriers.

This mantra led scientists like Francis Crick, Leslie Orgel, Carl Woese and other luminaries to favor an “RNA world”, a term coined by Walter Gilbert to refer to a primeval scenario where life began with ribonucleic acids. The choice seemed prima-facie a lucid one: some RNA-based information carriers are also capable of enzymatic activity that could potentially lead to their own replication. This scenario found solid support in the startling recent discovery that ribosomes, the enormous molecular machines that synthesize proteins from information encoded in RNA-based templates have crucial components made up precisely of RNA.

Yet, the subtle and beautiful RNA World was shattered by Nobel laureate Christian DeDuve, who compelled scientists come to grips with a harsh and sobering chemical reality: unlike proteins or polypeptides, the chemically more complex RNA could not be synthesized in a prebiotic world. Even if we were to grant this possibility, RNA is simply too fragile to be operational even under mild conditions. It would undergo hydrolysis and ultimately be degraded. In a nutshell, the chemical fragility of RNA is completely at odds with the chemical and structural robustness required in a prebiotic world.

Besides the chemical impossibility of the RNA World as a viable scenario for the origin of life, there is another deeper flaw at the core of this and other proposals: the dogmatic idea that Nature must operate through adaptive forces after life had originated, as if random drift could not play a constructive role in fostering functional innovation.

The RNA World hypothesis deployed some of the biggest talent in the field and yet proved fatally flawed at its chemical core. Other hypotheses on the origin of life have suffered a similar fate. Thus, the words of Charles Darwin resonate in today’s ears louder than ever: “I intentionally left the question of the origin of life uncanvassed as being altogether ultra vires in the present state of our knowledge”. Perhaps more blunt but just as eloquent is another quote of uncertain attribution that I often borrow: “The more I hear theories on the origin of life, the more I believe in God”.

Related Video:
Ariel Fernandez on Scientific scenarios for the origin of life: God is doing fine, thanks for asking